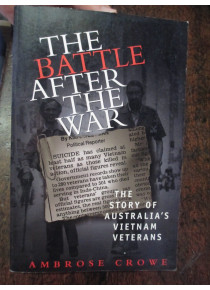 The Battle after the Vietnam War Australian Agent Orange

The author was conscripted into the Australian Army in 1966, serving as a Centurion tank gunner in Vietnam where he fought the Battles of Coral and Balmoral. During the 1980s he was involved with the Vietnam Veterans Counselling Service.﻿

Just over 500 Australians were killed in action Vietnam War. Of those who returned, to the date of printing, 280 Vietnam veterans have officially been recognised as having committed suicide. The Battle After the War reveals the shocking treatment handed out to Australia's Vietnam vets.

This is a comprehensive account of the Agent Orange controversy, the struggle of the Vietnam Veterans Association for a royal commission into the disbursement of this chemical during the Vietnam War and subsequent poisoning of diggers.﻿