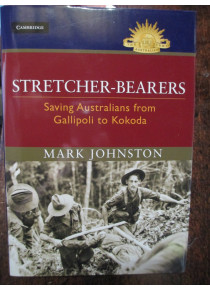 Stretcher-Bearers  Saving Australians from Gallipoli to Kokoda by M Johnston

Stretcher bearers is a compelling account of the experience of Australian stretcher-bearers during the First and Second World Wars.

Respected military historian, Mark Johnston traces the development of formal stretcher-bearing from its origin in the early nineteenth century under Napoleon to the Second World War.

Johnston draws on accounts by stretcher-bearers who worked on the front line, as well as tributes from rescued soldiers, to deepen our understanding of the crucial role these soldiers played in Gallipoli, Palestine, the Western Front in World War I, and in the Middle East and the Pacific in World War II.

The narrative is further driven by rich imagery, featuring over 130 full-page photographs. This book provides a generously illustrated, engaging and moving account of the history of the Australian stretcher-bearer, a figure praised by countless Diggers but never previously the subject of a book﻿