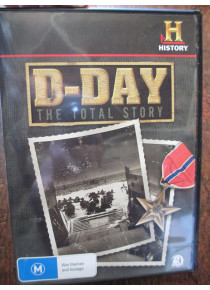 Code named Operation Overlord, D-Day saw 156,000 Allied troops storm the beaches of Normandy on the morning of June 6, 1944. Retreat was not an option. Victory was the only recourse. From tense war room strategies to the full fury of unmitigated combat, D-DAY: THE TOTAL STORY captures the entire arc of one of the world's great battles. This is the complete chronicle of the largest human invasion in history.