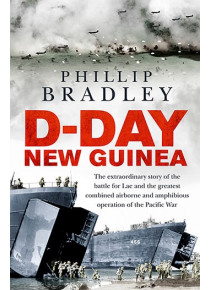 The most complete history of one of the most significant campaigns of the Pacific War and Australia's role in it.

'Java is heaven, Burma is hell, but you never come back alive from New Guinea' - was a saying within the﻿ Japanese military.

The capture of Lae was the most complex operation for the Australian army in the Second World War. In many ways it was also a rehearsal for the D Day invasion of France, with an amphibious landing combined with the first successful large-scale Allied airborne operation of the war. D-Day New Guinea brings together the extraordinary stories of the Australian, American and Japanese participants in this battle, and of the fight against the cloying jungle, the raging rivers and the soaring mountain ranges that made New Guinea such a daunting battlefield.

Phillip Bradley brings a compelling clarity, humanity and new insight into a little known but crucial Australian battle of the Pacific War.