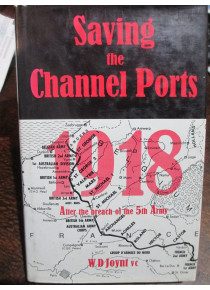 On the 14th of April 1918, Lieut-General Sir Charles Harrington, Chief of Staff 2nd Army met the Australian officers on Hazebrouch Railway Station to inform them, ‘you are the only formed body of troops between here and the channel ports’
This decisive part in the defence of the channel ports of France in 1918 has not, however, always being fully recognised. Victoria cross recipient Lieut-Colonel WD Joynt set about in this volume to offset the neglect. In a highly detailed narrative, he outlines the events that took place during the Germans Spring offensive of 1918. It is the most vivid and accurate account of the situation at that time by one who was there with the 8th Battalion AIF.