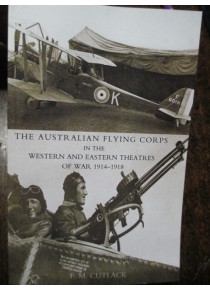 The Australian Flying Corps or AFC was the forerunner of the RAAF. It was formed as part of the Australian Army AIF for active service in World War One. This military book forms part (a volume) of Australia's Official History of 1st World War which was orginally published in 1923 by the Australian War Memorial . The volumes are commonly called Beans a reference to Charles Bean who was the founder of the AWM. Charles Bean wrote or was editor for the OFFICIAL HISTORY OF AUSTRALIA IN THE WAR OF 1914 - 18 C E W BEAN.

The AFC first confronted the German pilots on the Western Front in 1917 above the Battlefields of 3rd Ypres during the Battle of Passchendaele. Monash saw the great military possiblities of this new air force and quickly combined air attacks in battles. The AFC was primarily used for ground support during the famous 1918 Battles of Amiens Hamel Mount St Quentin and the many advances made on the Hindenburg Line by Australian Battalions. The volume has many references to Australian Air Aces of WW1 and text is supported by 32 maps and 54 photographs