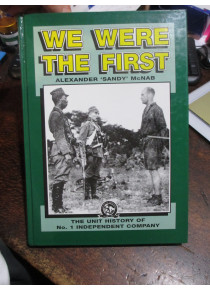 1 Independent Company History We Were the First Commando Unit History

We Were the First Commando Unit History

The 1st Independent Company was one of twelve independent or commando companies raised by the Australian Army for service in World War II. Raised in 1941, the 1st Independent Company served in New Ireland, New Britain and New Guinea in the early stages of the war in the Pacific, taking part in a major commando raid on Salamaua in June 1942. Having lost a large number of men captured by the enemy as well as a number of battle casualties, the company was withdrawn from New Britain later in 1942. The company was subsequently disbanded, with its surviving members being transferred to other commando units, and it was never re-raised.

Many members were taken POW at the Fall of Rabaul or during jungle fighting, the officers were separated from their NCOs and men. The officers were transported to Japan where they remained in captivity for the rest of the war, whilst the NCOs and men, along with other members of Lark Force that had been captured and a number of civilians, where put on to the Japanese passenger ship Montevideo Maru for transportation. Traveling unescorted, the Montevideo Maru sailed from Rabaul on 22 June. On 1 July the ship was sighted by an American submarine, the USS Sturgeon, off the coast of the Luzon, Philippines. The USS Sturgeon torpedoed and sunk the Montevideo Maru, without realising it was a prisoner of war vessel. Only a handful of the Japanese crew were rescued, with none of the between 1,050 and 1,053 prisoners aboard surviving as they were still locked below deck. All 133 men from the 1st Independent Company who were aboard the Montevideo Maru were either killed or drowned