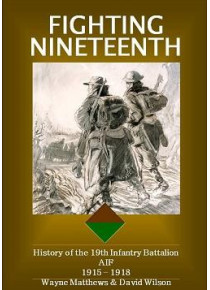 This Military Book is the Battalion History of the Australian Army's 19th Battalion Bn 1st AIF during World War One. After almost 95 years the story of the Fighting Nineteenth has been told in this book a valuable addition to Australia's Military History.
Almost 5000 men served in the 19th Battalion, AIF during its three and a half years as one of the four battalions of the 5th Brigade, 2nd Division.

The 19th Battalion was raised at Liverpool in New South Wales in March 1915 as part of the 5th Brigade. Some of the 19th’s original recruits had already served with the Australian Naval and Military Expeditionary Force (AN&MEF) in the operations to capture German New Guinea in 1914. The 19th left Australia in late June, trained in Egypt from late July until mid-August, and on 21 August 1915 landed at ANZAC Cove on the Gallipoli Peninsular.

At Gallipoli the Battalion participated in the last action of the August Offensive - on the very next day after landing the Battalion made an attack on Hill 60.

After the action at Hill 60 the 19th Battalion took over a  defensive roll in the trenches.
Until the withdrawal or Evacuation from the peninsula on the night of 19 December 1915, the 19th Battalion AIF was responsible for the defence of Pope’s Hill on the Anzac Ridge above Anzac Cove.

After the Evacuation the Battalion retreated to Egypt and was transferred to the Western Front in France. The 19th Battalion then took part in its first major offensive in France around Pozières between late July and the end of August 1916. After a spell in a quieter sector of the trenches in Belgium, the 2nd Division, which included the 19th Battalion, came south into France.  The 19th Battalion attacked near Flers between 14 and 16 November, in conditions that Charles Bean described as some of the worst ever encountered by the AIF.

In early 1917, German forces retreated to their new Hindenburg Line﻿ defences and the 19th Battalion AIF was involved in the general Allied advance following the Germans to the Hindenburg Line.
At Lagincourt, the 19th Battalion was one of four battalions to defeat a counter attack by a superior German force which was almost five times stronger. The Battalion took part in three major battles before the year was out, 2nd Bullecourt (3-4 May 1917) in France, and Menin Road (20-22 September 1917) and Poelcappelle (9-10 October) in Belgium.

During the spring of 1918 German Forces commenced Operation Michael, a major offensive which was stopped in part by the 19th Battalion. Lieutenant Percy Storkey was awarded the Victoria Cross﻿ for his actions during the fighting around Hangard Wood on 7 April 1918. With this last desperate offensive defeated, the 19th Battalion participated in the battles that pushed the German Army ever closer to defeat: Battle of Amiens on 8 August, the legendary attack on Mont St Quentin (devised by General Monash) on 31 August 1918, and the attacks on the Beaurevoir Line around Montbrehain. Montbrehain was to be the 19th Battalion’s last battle. It proved to be near the last battle of the whole AIF.

The 1918 casualties, together with the return to Australia leave for 1914 enlistees, dwindling numbers of new enlistments had sapped the strength of the AIF. On 10 October 1918 the 19th Battalion was disbanded to reinforce other battalions. 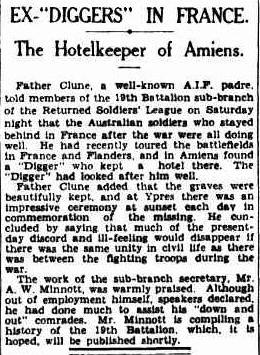 After the war for many years the 19th battalion had an active members association. Over the years, there were many calls for the History of the 19th Battalion to be written. In 1923, the Government even offered to fund the writing of the History.
See clip at bottom a member Mr Minnott made an attempt in the 1930's to record the History.  Congratulations to the authors as they have completed and produced a magnificent memorial to the 5000 odd members of the 19th Battalion during the Great War. A well produced history full of interest, written in chronological order of battle and easy to consult. For medal / genealogy researchers, there are numerous soldier personal pictures throughout the book and importantly comes with a research cd which has many more pictures of members, various member rolls including but not limited to Battle casualties, Master Nominal Roll, Honour Rolls, Members who entered from service with the AN&MEF, Medal Decoration, Also Medal gallanty Recommendations, Maps ++. In the appendixs of the book there is a Roll of Honour, List of Prisoners of War while serving with the Bn., Order of Battle , Enlistment stats, and detailed index completes this history.
﻿﻿﻿﻿﻿﻿﻿﻿

﻿Click to see the Wikipedia Page of the Australian 19th Battalion