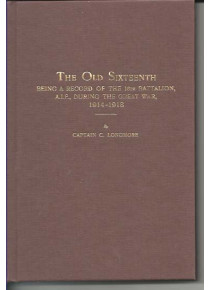 The Old Sixteenth Being a Record of the 16th Battalion AIF During the Great War 1914 - 1918 ' by Captain C. Longmore. This is the Official Battalion History compiled and written by Longmore in association with the 16th Battalion History Committee. This book
was first published in 1929. The book being offered is a  professionally produced
reprint of that history. It is a beautiful true reproduction of the 1929 edition
- brown cloth bound hard boards with gold gilt impressed decorations. There are
cheaper reprints but this is the best. Printed supreme plate quality anti-age paper
with original b/w prints. One that can be treasured as a hand me down Family History Book. Follows the 16th Battalion 1st AIF history from its formation in Western Australia. Training WA Broadmeadows Victoria Egypt First day landing Battalion on ANZAC Gallipoli Quinns Hill 971 and the many Battles on the Western Front (see below). Many B/W battle prints. Has full company listed soldier named Nominal Roll and Reinforcements. Other appendixs
include ; Officers named who were Promoted from the Ranks, Officers named captured
by the Enemy , Officer Named Casualties Listed by order Battle , Casualties
in Infantry by Division number only , Casualties Infantry in 16 Battalion by
number, Battalion members decorations named list. Full Soldier named Nominal Roll at Evacuation of Gallipoli in order of Company﻿