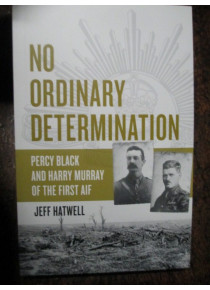 It would be difficult to find a greater story of military mateship where both friends during the course of the war, climbed to such high esteem.

But such is the case of two magnificent Australian soldiers Percy Black and Harry Murray. Black and Murray joined up at Blackboy Western Australia in 1914, Murray a timber worker from the South-West, and Black a miner and prospector from Southern Cross of that state.﻿ Both formed a machine gun crew in the 16th Battalion and served with great distinction at Gallipoli.

Harry Murray’s greatest accolade was his stand at Stormy Trench for which he was awarded the Victoria Cross.  Both fought at the First Battle of Bullecourt and it was during this battle that Percy Black was killed trying to capture the Hindenburg Line.
Harry Murray would later say of Black, ‘He was the bravest man in the AIF, and I knew hundreds of them’.  This is a fine tribute by ﻿Murray who was the most highly decorated of all the millions of infantrymen who served in the armies of Great Britain and its empire in World War 1.
He remains the most highly decorated Australian soldier ever.
According to Charles Bean founder of the Australian War Memorial, Percy Black was the "greatest fighting soldier in the AIF".

They both had an uncanny ability to lead under great hardship and gained remarkable respect of men. For example, in 1933 at a meeting of the Perth Legacy Club, at the Soldiers' Institute. One of the visiting officials, Mr. Fawcett who was an old soldier of the AIF 4th Brigade, broke down before for an address. When he went to commence it was difficult for him to speak, and he could only just explain that he served as an officer in WW1, and around the walls were pictures of some of his greatest friends, men who served in the Old Sixteenth. "Just behind me," he said, indicating the photo of Percy Black, "is the photograph of one of the greatest soldiers and finest gentlemen I ever met. I hope you will excuse me when I say I would like a few moments' rest before I address you."

Such was the standing of these two mates in the AIF.

This is their story

Praise for this book:

‘In a word: inspiring’ Herald Sun

‘Absorbing … this book is one of the most completely detailed records of any that this reviewer has had the pleasure of reading.’ Reveille