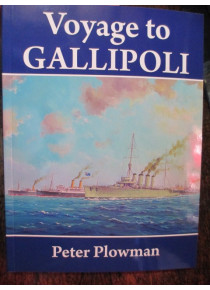 VOYAGE TO GALLIPOLI ' by Peter Plowman. Journey with the 1st ANZACs as they go on board for the adventure of their lifetime. An adventure that will cost many their whole life..

An excellent book to obtain the feel for what Grandfather experienced on that first Australian New Zealand Military Convoy of WW1. Great for General genealogy family history research.  On the 2 November 1914, the largest armada ever assembled in Australian waters left our shores from Albany Western Australia. Albany was the last place in Australia to be seen by these 1st Anzacs before going to fight in WW1. ﻿Also has chapter on the 2nd Convoy from Australia that left Albany one month later.﻿

In 1914 the original Anzacs journeyed to Egypt, in 1915 to Lemnos Island and of course just prior to the 25th April 1915 onwards to the Dardanelles and the Gallipoli Landing. This book is a history of those voyages - ships, soldiers, life and times.

The detailed text is supported by numerous pictures of the ships used, actual soldier descriptive accounts of life on the convoy etc also covers the Battle Emden vs HMAS Sydney﻿.﻿

On the 9th November 1914, just a week after leaving Albany WA, the Battle of Cocos Island took place which saw the destruction of the German raider Emden. The Emden had landed a party of troops on Cocos Island but the British radio operator was able send an alert message. By coincidence, the Convoy was only 96 kms away.
The HMAS Sydney immediately set course for the Islands.
The resulting Australian victory was acclaimed throughout the British Empire.

A valuable military book addition for our Anzac Gallipoli Centenary.