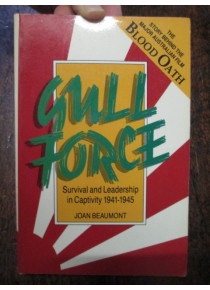 The Battle of Ambon occurred on the island of Ambon in the Dutch East Indies (Indonesia), on 30 January – 3 February 1942, during World War II. A Japanese invasion was resisted by Dutch and Australian forces. The chaotic and sometimes bloody fighting was followed by a series of major Japanese war crimes.The Australian Army's 1,100-strong Gull Force, commanded by Lt. Col. Leonard Roach, arrived on 17 December. The force consisted of the Australian 8th Division's 2/21st Infantry Battalion, as well as some divisional artillery and support units. Kapitz was appointed Allied commander on Ambon. Roach had visited the island before Gull Force's deployment and requested that more artillery and machine gun units be sent from Australia.
b/w pls., maps, appends., bibliog., index, Story of the Australians in battle on Ambon in 1942 and latter as POW.