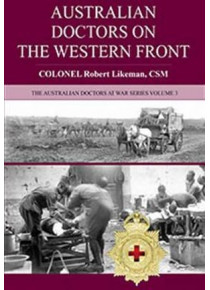 Australian Doctors on the Western Front﻿

Each officer’s medical qualifications are listed, along with any honours and awards. The detailed text is supported by numerous photographs. There are also introductory essays about the campaigns in which the Australians served, and accompanying maps.

This is the third volume in the series ‘Doctors at War’ written by Colonel Robert Likeman CSM,  retired from the post of Director of Army Health in Canberra.

25 The AIF in England