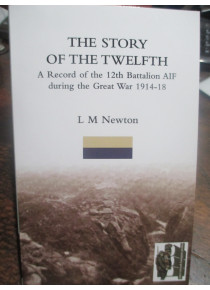 STORY OF THE TWELFTH A Record of the 12th Battalion AIF during the Great War 1914-18 by L M Newton.

The Story of the Twelfth Battalion A Record of the 12th Battalion AIF during the Great War 1914-18 ' by L M Newton. 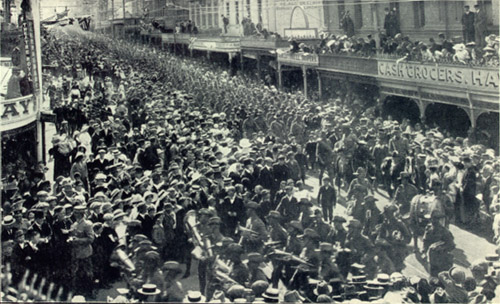 The author was Adjutant of this largely Tasmanian-based unit - half of the battalion was recruited in Tasmania, a quarter was recruited in South Australia, and a quarter from Western Australia. In a chronological detailed text he records the Battalion's operations from August 1914 through to the February 1919 .

This is the Official Battalion History which was compiled and written with the assistance of the 12th Battalion Association, numerous battalion members, and many written documents/diary/information.

The 12th Battalion was the reserve battalion of the covering force for the 25th April Landing on Gallipoli / Anzac Cove. The 12th Battalion was split amongst several ships for the landing and so it did not land as one force. Members of the Battalion HQ were faced with cliff like terrain above the beach. Calamity struck the Battalion almost immediately when it's CO Lieut. Colonel Charles Clarke was killed leading from the front. He was advancing past the first Turkish Trenches on Plugges Plateau when he was shot by a Turkish sniper. The Battalion contributed greatly to the defence of Anzac and was distinguished at the Battle of Lone Pine in August Offensives at ANZAC.

After Gallipoli the 12th Battalion Battle Honours included Battle of Pozieres. The Battalion also fought with glory at the 2nd Battle of Bullecourt in 1917, losing in one month 600 men and gaining two VCs. Many of the members and recipients of awards are named in the text.

The final chapter is effectively an appendix of awards and casualties. The book being offered is a 2010 reprint of the original which was printed in 1925. It still remains the only History of this famous Battalion ever produced and importantly it was written by one who was there in the trenches. Although, there has been several reprints of this same 12th Bne Military History over the years. Of course the value of an original copy of this history is close to one thousand dollars. Even these reprints escalate in value when they too also become out of print. Here is your chance to obtain this book that can be treasured as a hand me down Family History Book.

By end of the war, the 12th Battalion suffered casualties of 1135 killed, 2422 wounded . It was disbanded in 1919. A large history, at 500+ pages a very detailed text supported with maps, diagrams, b&w pic Illustrations. A prime source for genealogists and military historians since 1925.