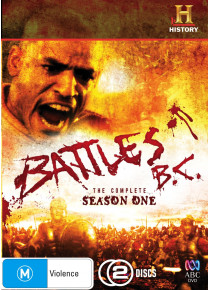 Prepare for a riveting portrayal of some of the most exciting battles of ancient history. This exciting series from HISTORY uses computer graphics and live-action stunts to bring to life the battles past military leaders. Using a graphic style similar to 300, Battles BC shows how leaders from the ancient world fared in some of the greatest conflicts in history, exposing the truths and myths behind their legendary feats. BATTLES BC features: Moses: Death Chase Joshua: Epic Slaughter David: Giant Slayer Hannibal: The Annihilator Alexander: Lord of War Judgment Day at Marathon Ramses: Raging Chariots Caesar: Super Siege
8 Episodes, 2 Discs.﻿