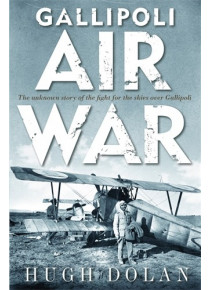 When in future years the story of Helles and ANZAC and Suvla is weighed, it will, I think, appear that had the necessary air service been built up from the beginning and sustained, the Army and the Navy could have forced the Straits and taken Istanbul.

From the author of 36 Days comes the dramatic and almost unknown account of the war fought high above the Gallipoli peninsula. More than 2000 missions were flown by the early aviators of both sides, with the fragile seaplanes, aeroplanes and balloons of the Allies battling both the elements and the Turkish Air Service several thousand feet above enemy territory.

In Gallipoli Air War the bloody contest waged for Gallipoli is seen through the eyes of the pilots and their observers, often in perilous planes or balloons and blimps that had seen better days. Whether flying reconnaissance missions, acting as artillery observers for the guns of the Royal Navy or bombing Turkish targets, the men who flew these frail machines had a remarkable impact on the campaign that until now has never been properly brought to light.

Former Royal Australian Air Force intelligence officer Hugh Dolan has interwoven meticulous research, intelligence reports, and the diaries and accounts of the combatants, along with his own experience of the Iraq War, to create a detailed and compelling narrative. Gallipoli Air War has opened a fascinating new front in the well-known Gallipoli story.