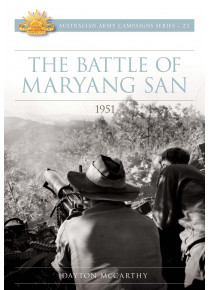 The Battle of Maryang San 1951 by D. McCarthy

The Battle of Maryang San 1951

This book describes the actions during the Battle of Maryang San.

Over one week in October 1951 and as part of a wider divisional assault, the 3rd Battalion, The Royal Australian Regiment (3 RAR), under command of Francis George "Frank" Hassett AC, KBE, CB, DSO, LVO manoeuvred across difficult hilly terrain to dislodge and destroy Chinese forces three times its number.

The attack was named after the biggest of these hills and became known as the battle for Maryang San or “Operation Commando”.

Battle of Maryang San is widely regarded as one of the RAR’s and the Australian Army’s greatest battlefield accomplishments.

The official historian for the Korean War, Robert O’Neill, wrote of this battle:

"In this action 3RAR had won one of the most impressive victories achieved by any Australian battalion. In five days of heavy fighting 3RAR dislodged a numerically superior enemy from a position of great strength. The Australians were successful in achieving surprise on 3 and 5 October, the company and platoon commanders responded skilfully to Hassett's directions, and the individual soldiers showed high courage, tenacity and morale despite some very difficult situations, such as that of D company when the mist rose on 5 October and those of B and C Companies when the weight of enemy fire threatened their isolation of Hill 317 on 7 October ... The victory of Maryang San is probably the greatest single feat of the Australian Army during the Korean War."