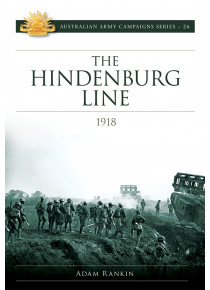 The Hindenburg Line 1918 by A Rankin

In the last devastating months of the First World War, the Australian Corps with the ﻿British Fourth Army pursued the Germans to their final defensive position — the Hindenburg Line, a formidable series of defensive positions studded with concrete dugouts and thickly set barbed wire. Detailed coverage of the following Australian offensives at St Quentin Canal, Bellicourt Tunnel, Hargicourt, Nauroy and Montbrehain. ﻿

Some of these battles the Australians were assisted by American units. The book includes individual bios of Victoria Cross gallantly award recipents of the battles. Weapons of the battles are described and illustrated. Impressive run of the battle colour maps are provided.

'The Hindenburg Line 1918' describes the two fiercely fought set-piece battles which saw Fourth Army break through the German line, paving the way for the final pursuit which ended with the Armistice. The Australian Corps was a pivotal part of the offensive to breach the Hindenburg Line, culminating in the assault to capture Montbrehain, the last Australian battle of the war.

By the time it reached the Hindenburg Line, the Australian Corps had been in the line for months, its units exhausted and depleted. Despite this, these final offensives saw the battle-hardened Australians demonstrate their skill in the use of infantry, artillery, machine-guns, tanks, aeroplanes and all the other implements of war that had altered so fundamentally since 1914. Australian commanders had likewise benefited from years of war and were highly skilled in planning complex operations that incorporated the latest tactics, techniques and procedures. But the scale of operations on the Western Front required close cooperation with British and Allied troops, and it was as part of this coalition that the Australian Corps would play its vital role in finally securing battlefield victory and bringing the war to an end.