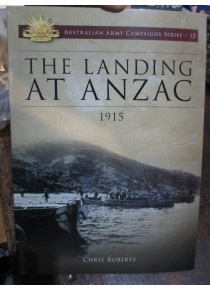 A new look at the Anzac Battle during those first days. The newest addition to the Australian Army Campaigns Series No 12. The Landing at Anzac, 1915 challenges many of the cherished myths of the most celebrated battle in Australian and New Zealand history — myths that have endured for almost a century. Told from both the Anzac and Turkish perspectives, this meticulously researched account questions several of the claims of Charles Bean’s magisterial and much-quoted Australian official history and presents a fresh examination of the evidence from a range of participants.

Author Chris Roberts takes a forensic look at this iconic battle, providing a tactical analysis of the terrain, scrutiny of the misplaced landing and the two fateful decisions that determined the initial course of the battle, and examines the performance of both Anzac and Turkish commanders and troops. Long considered a ragtag army, the Ottoman forces proved tough, well-trained opponents who outclassed an inadequately trained, inexperienced and poorly prepared Australian and New Zealand Army Corps. The Landing at Anzac, 1915 opens with an essential comparative study of the opposing forces and their respective battle plans, pushes through the failure of the Anzacs to exploit their initial success, the bitter fighting at Lone Pine and Baby 700 on the afternoon of 25 April and concludes with the stalemate reached by the evening of 27 April.

The Landing at Anzac, 1915 reaches a carefully argued conclusion in which Roberts draws together the threads of his analysis delivering some startling findings. But the author’s interest extends beyond the simple debunking of hallowed myths, and he produces a number of lessons for the armies of today. This is a book that pulls the Gallipoli campaign into the modern era and provides a compelling argument for its continuing relevance. In short, today’s armies must never forget the lessons of Gallipoli

These Australian Army campaign Series books are well sought after as they provide and excellent detailed accounts together with superb graphic maps and illustrations.