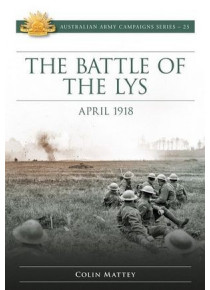 This Australian Army Book describes the battle to save Hazebrouck — part of what was to become the Battle of the Lys — and focuses on the role of the 1st Australian Division in halting the surging German thrust towards the town. While often neglected by history, this action was critical to the survival of the BEF and the Allied war effort in 1918 and deserves far greater recognition.

The Battle of the Lys also brings the performance of the BEF divisions during Operation Georgette into sharper focus while providing a unique opportunity to reassess BEF and German performances at what was a decisive point in the First World War.﻿

We will not Forget their Courage.