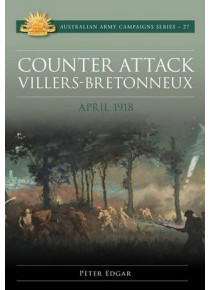 In March 1918, Germany launched a massive spring offensive - Operation Michael. Resting in the Ypres sector after the horrors of the Passchendaele campaign, the Australians were among the first sent south to try to block the enemy.

Now, after an unprecedented fortnight of advance, Germany’s goal was to capture the town of Villers-Bretonneux, key to the major rail junction of Amiens. The first attempt on 4 April found the 9th Australian Infantry Brigade in the centre of the line. They stopped the enemy at the gates.

On the 24 April, the Germans launched a new attack, led by tanks, and took the town. Standing by to counter-attack were the 15th and 13th Brigades of the Australian Corps. Not everything went to plan and casualties were high, but the counter-attack was brilliantly executed in spite of the odds.

It became ‘a soldier’s fight’ in which the Australian troops’ morale and eagerness to get to grips with the enemy, together with their aggressive, well-practised moves under fire triumphed. Counter Attack: Villers-Bretonneux – April 1918 details the pivotal role the Australians played in denying German victory. Villers-Bretonneux was never again threatened by the enemy.﻿