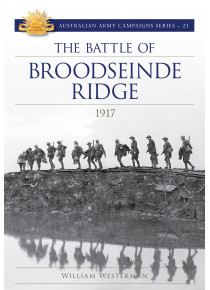 The Battle of Broodseinde Ridge 1917 By W Westerman

This Australian military book forms part of the Australian Army Campaign Series being number 21 of the ever popular series﻿.﻿

The Third Battle of Ypres – more commonly referred to simply as Passchendaele – is often remembered as a futile slaughter through the mud of Flanders, costing thousands of lives and gaining very little. While the campaign failed to achieve the grand strategic goals set out by its architects, in the midst of the British Army’s slow progress hampered by torrential rain, a period of dry weather, coupled with excellent command and staff work and a little bit of luck, produced one of the most impressive tactical victories seen on the Western Front since the stalemate of trench warfare commenced.

The Battle of Broodseinde Ridge, fought on 4 October 1917, was a powerful display of how effective the British Army could be in taking and holding ground if its objectives were limited, the weather conditions were favourable and firepower was overwhelming.

Three Australian divisions and the New Zealand division fought side-by-side, with British divisions on their flanks, and achieved most of their objectives well before midday. At the time, Broodseinde Ridge was one of the Australian Imperial Force’s most impressive displays on the Western Front, but has not been as well remembered at the Australian feats of arms in 1918.

The Battle of Broodseinde Ridge 1917 provides a narrative of this important battle, situating it within the context of the Third Battle of Ypres, analysing the plan adopted by the British Army and the composition of the combat arms that executed it.

Crucially it emphasises the work done in the days preceding the battle, without which the impressive display of the Australian infantry would not have been possible.