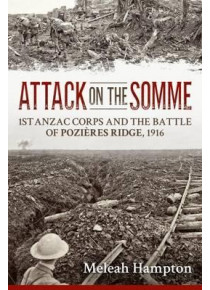 Attack on the Somme : 1st ANZAC Corps and the Battle of Pozieres Ridge, 1916 by M Hampton

The Battle of Pozieres Ridge lasted precisely six weeks. In that time the 1st Anzac Corps, in whose sector most of the fighting took place, advanced the British line just over a mile and a half in a north-westerly direction. During this period of time the three divisions of 1st Anzac Corps rotated in and out of the line twice, each time conducting one or more offensive operations against heavily defended German positions. At its conclusion, the fighting around Pozieres and Mouquet Farm had yielded very modest territorial gains at an enormous casualty rate.

Although a study of 1st Anzac Corps, Attack on the Somme is not history of Australian endeavour. The Australian Divisions slotted into the British Expeditionary Force on arrival to the Western Front, and fought under General Gough at Reserve Army. There was nothing particularly remarkable about the corps - some members had had some experience at Gallipoli, but the majority were new recruits. The events at Pozieres in July and August 1916, too, were absolutely representative of the 'average day on the Somme' for the British. Unlike the ill-fated first day of the campaign, or big days like the night attacks of 14-15 July, most days on the Somme involved only a small percentage of the line engaged in fighting the enemy in a limited, set-piece attack - just like any day on Pozieres Ridge.

The one notable difference about the 1st Anzac Corps of 1916 is the sheer volume of records left of its time on Pozieres Ridge. The Australian Official Historian, C.E.W. Bean, ensured as much documentation as possible was saved for posterity. Orders and messages survive which are, in almost all other cases, simply not available for other contemporary British or Dominion troops. What they reveal is a wide range of operational approaches at all levels of command, even down to company level. On some occasions they enable the identification of individuals critical in the maintenance of a precarious position. These documents also reveal the point at which diversity and innovation could not flourish with the influence of high command. The Australian memorial at the Windmill carries the words of Charles Bean, who said 'Australian troops...fell more thickly on this ridge than on any other battlefield of the war'. This study of the battle reveals that more often than not, this was an unnecessary waste of lives and resources for the most negligible of gains, if any gains were made at all.﻿