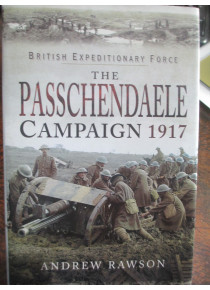 Passchendaele Campaign 1917 by A Rawson

Passchendaele Campaign 1917 by A Rawson

This is an account of the British Expeditionary and Allied Forces battles in the summer and autumn of 1917. It begins with the Allied plan to free up the Flanders coast, to limit German naval and submarine attacks on British shipping. The opening offensive began with the detonation of nineteen mines on 7 June and ended with the capture of the Messines Ridge.

The main offensive started with success on 31 July but was soon bogged down due to the August rains. Three huge attacks between 20 September and 4 October had the Germans reeling, but again the weather intervened and the campaign concluded with futile attacks across the muddy slopes of the Passchendaele Ridge. Each large battle and minor action is given equal treatment, giving a detailed insight into the most talked about side of the campaign, the British side. There are details on the planning of each offensive and the changing tactics used by both sides.

There is discussion about how the infantry, the artillery, the cavalry, the engineers and Royal Flying Corps ﻿