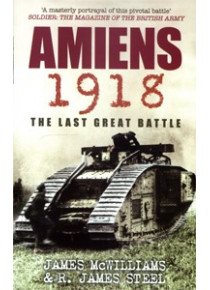 Amiens 1918: The Last Great Battle ' by J McWilliams and R. James Steel.
On 8 August 1918, the Allied forces launched the surprise attack that heralded the end of the First World War. With skill and daring, 21 divisions of men breached the German lines, supported by 500 tanks (the largest number to have been active in any one battle of the war)
and 1,000 aircraft. In their wake they left 50,000 dead or wounded German soldiers
along a stretch of 11 miles. The Australians with their Canadian comrades, spearheaded
the Battle of Amiens the great offensive that was to bring the war to a victorious
end. The Australians setting out from the positions of Villers-Bretonneux and
Hamel, in two hours had accomplished all their objectives, and the Canadian
troops who had begun the attack alongside them had advanced several kilometres.
In just over 3 hours, the enemy's front line had been overrun. In total, the
Allied forces captured 29,144 prisoners, 338 guns, and liberated 116 towns and
villages. Ludendorff, the German commander, famously called the 8th August "the
black day of the German Army".