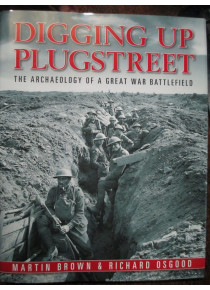 During 2007, a group of archaeologists begin to excavate a part of the World War I front-line in an area in Belgium known as Plugstreet.

This was an area occupied by the Australian Third Division during the Battle of Messines which took place in June 1917. This Division formed part of the right wing of the Allied attack on the 7 June 1917, alongside the New Zealanders as part of II Anzac Corps. It was not long into the dig that they began to find remains of Australian soldiers.

A quest began to historically document the journey of the soldiers to this battlefield. Thus the archaeologist team also travels to Salisbury Plain in England which was a training area integral to the Corps. In this highly interesting book they unearth the relics of war and piece together a true life story of the men who courageously fought in these trenches.
In particular, they find many artifacts relating to the
Australian 33rd Battalion AIF.

Obviously, the book would be of interest to 33rd Battalion historians, family history researchers and all that are interested in the Battalions of the Third Division AIF.