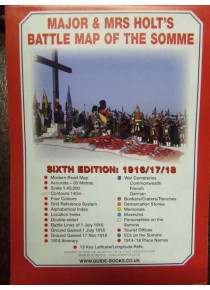 This map is also a companion to the Somme Battlefield Guide Book and provides a most detailed and informative picture of the Somme battlefield. It is a modern road map, scale 1:45,000 and accurate to 50 metres with contours, double-sided, in four colours and with a grid system. It extends from the junction of Fourth Army with the French Sixth Army at Bray-sur-Somme in the south along the whole front of Fourth Army and into the Third Army sector north of Gommecourt in the north. From west to east it extends from just behind the British front line on 1 July 1916 east to the Autoroute du Nord just beyond Bapaume. It shows the battle lines on 1 July 1916, the ground gained that day and the final line on 17 November 1916. On the other side is a smaller scale map of the Somme battlefield showing all Fourth Army area back to the line Amiens-Doullens and part of the French sector south of the Somme. All features and places of interest are marked and numbered - cemeteries, memorials, bunkers, craters, trenches, museums, locations associated with named personalities and VCs. ﻿