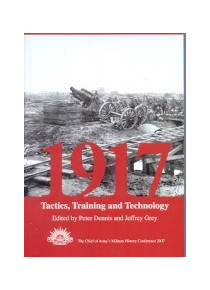 Australians in 1917 Tactics, Training and Technology

This Australian War book is a study by The Australian Army of the tactics which prevailed on the Western Front Battlefield during 1917. Developments in warfare, training, introduction of the tank and other mechanised innovation of that year helped lay the foundations of both victory and defeat as the armies and nations on all sides tried to master the challenges of mass industrial warfare.

This book discusses, 1st Division AIF in 1917, Command at Passchendaele, the Americans in 1917, German army, morale problems in the French army, New Zealand attacks of that year, the Third Battle of Ypres and more.