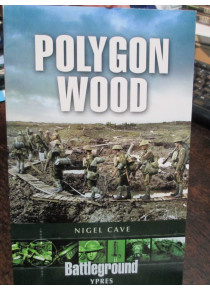 This military book titled ' Polygon Wood ' by Nigel Cave is part of the popular Battleground Series.

These books are excellent  for their historical detail which is supported by superb maps, tour guides, visitor walks,and then and now pictures. The Battleground series war Books have become very collectable.

The name "Polygon Wood" derived from a forest that lay along I ANZAC's axis of advance. Scheduled to begin on 26 September 1917, the attack was almost derailed by a German attack on the British X Corps to the south of I ANZAC.

A day earlier, Australian troops of the 15th Brigade, preparing for their attack, took part in fending off the Germans. Their advance the next day began with continuing uncertainty as to the security of their flank.

The Australian and British advance began on schedule at 5.50 am on the 26th, with the 4th and 5th Divisions, on the left and right respectively, taking the lead in the I ANZAC sector. The infantry advanced behind a heavy artillery barrage - the noise of this was compared to a roaring bushfire - and they secured most of their objectives without difficulty. To the south, the 15th Brigade, which after its efforts the previous day had been reinforced by two battalions from theAustralian 8th Brigade secured not only its own objectives but those allocated to the neighbouring 98th British Brigade.

The Germans launched several counter-attacks but these were stopped by the heavy defensive artillery barrages used to protect the infantry consolidating on their objectives; this was a feature of the Plumer battles.