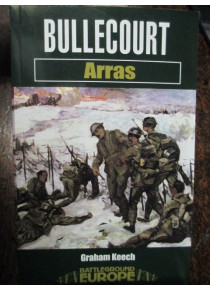 Battle of Bullecourt was an attack on the Hindenburg Line taking place between the French villages of Bullecourt and Reincourt. The offensives were undertaken in April and May 1917. The Battles become known as 1st and 2nd Bullecourt. These battles were mostly fought by Australian Battalions.

British Commander, General Gough had become infatuated with the newly introduced weapon called the Tank to the Western Front. He ordered that the 1st Bullecourt offensive be undertaken without artillery support, only Tanks were to be used. On the Battlefield at 1st Bullecourt the Tanks were a complete failure. This necessitated the infantry battalions attacking the German Hindenburg wire without artillery. The men were cut down on the wire. At great human cost they succeeded in taking the first trench but it could not be held.  ﻿

Not one to rethink a bad idea Gough ordered another attack by the Australians over the exact same ground about one month later. This time the Hindenburg Line was held but once again resulted in the filling of another large cemetery﻿ plot.