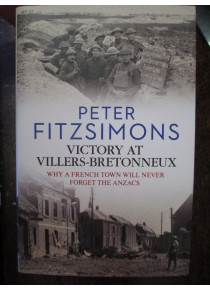 One of the most enspiring Australian Military History stories was the Australian Army stand against the advancing Germans around Villers-Bretonneux  and Amiens in France in April 1918.

A somewhat famous AIF episode took place when the Australians were hurriedly advancing towards the Germans. An Australian soldier witnessed a woman fleeing from the advance struggling with chattels etc. He told her, "unpack, unpack the Australians are here now!"﻿ Such was the undaunting spirit of the Australian Imperial Force (AIF).﻿

Across a 45-mile front, no fewer than two million German soldiers hurl themselves at the Allied lines, with the specific intention of splitting the British and French forces, and driving all the way through to the town of Villers-Bretonneux, at which point their artillery will be able to rain down shells on the key train-hub town of Amiens, thus throttling the Allied supply lines.

For near two weeks, the plan works brilliantly, and the Germans are able to advance without check, as the exhausted British troops flee before them, together with tens of thousands of French refugees.

In desperation, the British commander, General Douglas Haig, calls upon the Australian soldiers to stop the German advance, and save Villers-Bretonneux. If the Australians can hold this, the very gate to Amiens, then the Germans will not win the war.

'It's up to us, then,' one of the Diggers writes in his diary.

Arriving at Villers-Bretonneux just in time, the Australians are indeed able to hold off the Germans, launching a vicious counterattack that hurls the Germans back for the first time since their offensive began.﻿

A large book of some 800 pages is a must whether for historical research or for the family history reader seeking answers about the action in which a family member may of been engrossed.