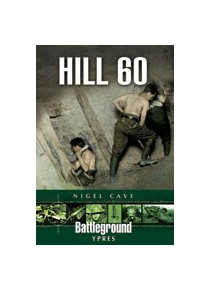 This military book titled ' Hill 60 ' by Nigel Cave is part of the popular Battleground Series . For the Australian Gallipoli Family History researcher this place name is not to be confused with "Hill 60 Battle" which took place on Gallipoli in August 1915.

These books are excellent  for their historical detail which is supported by superb maps, tour guides, visitor walks,and then and now pictures. The Battleground series war Books have become very collectable.

The name "Hill 60 " derived from the map height contour line which signifies the elevation of the Hill. Due to the flat terrain around Ypres this small hill had an important view over the city of Ypres in Belguim. The Hill was 'created' by the overburden from a railway cutting which was made some years before World War One. The Hill 60 front in 1917 formed part of the Battle of Messines which was fought along a wide frontage.

Australian infantry fought on the southern end of this line near Messines village, while to the north at Hill 60 nearer to Ypres Australian tunnellers played a vital role in the detonation of some of a series of huge mines beneath the enemy’s trenches. The 1st Australian Tunnelling Company had worked there since November 1916, extending shafts for the mines while sometimes encountering German underground works. Finally, along the whole British front, 19 mines were exploded with a devastating effect and an impact that some said they felt in London. ﻿

This book provides a history of all Battles that prevailed on Hill 60 Ypres from 1915 through to the attack and mining in 1917. Hill 60, some three miles to the south east of Ypres, conceals beneath it a labyrinth of tunnels and underground workings. This small area saw horrendous fighting in the early years of the war as the British and Germans struggled to control its dominant view over Ypres.﻿

For a book dedicated to Australian Mining operations click here