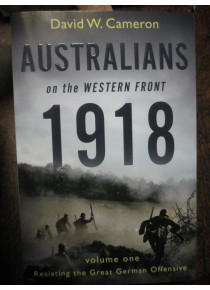 Australians on the Western Front 1918 Volume I Resisting the Great German Offensive By D. W. Cameron

The author, David Cameron, takes the reader on a journey back to early 1918 on the Western Front when the Germans had undertaken a massive offensive called Operation Michael.
The Germans were breaking through the Allied lines, all the country to the Channel Ports become vulnerable.﻿

The Australians at the time were mostly at rest out of the frontlines.

They were hurriedly called upon﻿ to make valiant stands against the Germans at places like Hazebrouck, Dernancourt, Morlancourt and Villes Bretonneux.﻿
This is the story that all Australians can be justifiably proud﻿.

The Australian AIF were responsible (in their sector) for not only halting the German advances but their relentless steadfast defence resulted in the overall collapse of the German offensive. Their valiant stand at Hazebrouck saved the Channel Ports.

This is the first of a two volume series about the Australians on the Western Front during 1918. After the April 1918 Australian successes, General John Monash took command of the Australian Corps.

The Australian AIF under Monash would then play a pivotal role in the great offensives of 1918 which would then lead to the overall victory of World War I in November.﻿

The highly researched narrative is supported by battlefield maps and photo section.