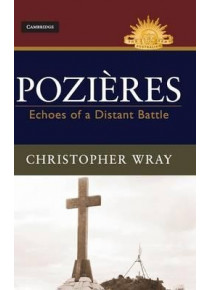 Pozieres Echoes of a Distant Battle by C. Wray

From July to September 1916, some 23,000 Australians were killed or wounded in the Battle of Pozieres. It was the first strategically important engagement by Australian soldiers on the Western Front and its casualties exceeded those of any other battle of the First World War, including Gallipoli.

In this important book, Christopher Wray explores the influence of Pozieres on Australian society and history, and how it is remembered today. In the opening chapters he revisits the battle and considers its aftermath, including shell shock and the psychological effects experienced by surviving soldiers.

The concluding chapters examine the way in which the battle has been commemorated in literature and art, and the extent to which it has been overlooked in contemporary remembrance of the war.

Generously illustrated with photographs, maps and paintings, Pozieres: Echoes of a Distant Battle is essential reading for anyone interested in the First World War and Australia's post-war society.﻿