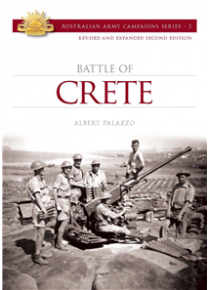 Australians at the Battle of Crete 1941 No 1

This military book gives a clear precise history of the defense and fall of the Island of Crete WW2.

Between 20 May and 1 June 1941 the Second World War came to the Greek island of Crete. The Commonwealth defenders consisted of Australian, New Zealand and British refugees from the doomed Greek Campaign who had not recovered from defeat. Matched against them were crack German paratroopers and mountain soldiers who had only tasted victory. Over eleven days the two sides fought a desperate action that generated tales of stubborn determination and reckless bravery on both sides. It was an innovative campaign - warfare’s first aerial invasion – and at times its outcome balanced on a knife edge. Richly illustrated, the Battle of Crete examines the commanders and the decisions they made, the men who fought, and the weapons they used in the epic struggle for the island. This book is part of the Australian Army History Unit's Campaigns Series; comprehensive, well-researched and easy-to-read books on Australia's military campaigns.﻿