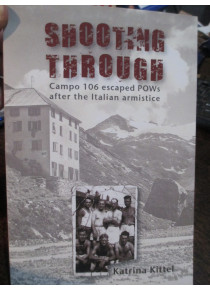 Shooting Through Campo 106 escaped POWs after the Italian Armistice By: Katrina Kittel

In early September 1943, Italy capitulated to the Allies. Australian prisoners of war, POWs, seized this watershed moment and snatched supplies before walking out of Italy's rice farms scattered on the Piedmont plain west of Milan.

Escapes were mostly easy but freedom was vexed. The ultimate challenge for escaped POWs was to navigate and to outlive the volatile context of post-armistice Italy beyond their prison camps. Wearing uniforms or a motley clash of civilian cast-off clothing, escapers had a price on their heads as they headed north towards alpine passes and neutral Swiss territory, or as they wandered in search of advancing Allied Lines in south Italy. During their treks through mountains, valleys and 'freedom trails', Australians teamed up with New Zealand, British and South African POWs to dodge German and fascist militia and to take up arms with fledgling Resistance brigades. Not all escaped POWs survived.

At its heart, Shooting Through highlights a unique shared history between Australian escapers and the Italians who risked severe retributions to host and guide the POWs.

Drawing extensively on first-hand accounts sourced from Australian and British archives, as well as memoirs and oral accounts by ex-POWs and Italian witnesses, Katrina Kittel weaves the stories of thirty escaper groups through time and theme to reveal key evasion routes and the various outcomes that befell escaped POWs in Italy. The veterans' accounts burst with humour and compassion as they offer their insights into Italy's war. From her perspective as a graduate historian and as a daughter to a former POW, Katrina Kittel has uncovered a richer story behind the few enigmatic details that her father, Colin Booth, and many of his fellow POWs chose to share with their families.

Shooting Through includes a nominal roll of Australian POWs interned at the Campo 106 rice farms.