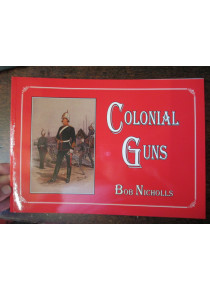 This military book is a study of the colonial guns or artillery of the Australian colonies. Also has a map showing the Australian coastal fortifications before Federation. The book then lists the main artillery of those early Australian times. Not only the guns, but topics such as rifling and shells, the breach loaders, Garrison muzzle loading guns and the breach loading field gun of the early 20th century are discussed. Somewhat of an overview but then well worth the money being asked, for anyone with an interest in early artillery.
Especially people who forebears served in the early Australian artillery garrisons.﻿