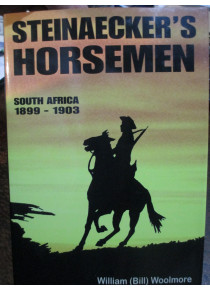 This unit numbered up to 450 members and many were Australians.
A notable Australian in the unit was the Medical officer, Alan James Campbell, born in Adelaide South Australia and studied to become a doctor surgeon at the University of Adelaide. In November 1900, he joined Steinaecker Horse as a Surgeon Captain during a period that was regarded as one of the worst malaria seasons during the war﻿.
He eventually became a malaria victim himself and on 19th March 1902 at age 30 years, died of the disease﻿.

During the South African War the 'Horse' operated in the area where years later the Kruger National Park was established. Their main task was to secure the Portuguese border and the adjacent Lowveld to prevent Boers from smuggling weapons and carrying despatches to and from the outside world. Steinaecker's men undertook most arduous and very dangerous guerilla campaigning; but being a corps specially recruited for such tasks, and having an admirable leader, they on many occassions escaped serious casualties.

The 'Horse' was one of the most complete and self-contained units in the country. They had their own intelligence, transport, workshops, etc and were able for over a year to work the Selati railway with their own men.﻿

The very large appendix has a huge and useful bio of what seems like all members, Honours Roll and notable Honours & Awards List.﻿