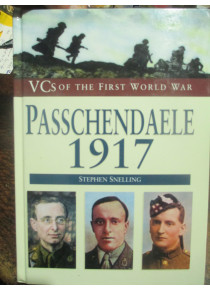 This book lists all the Australians , Canadians, British and New Zealanders who have earned the highest military honour for bravery the Victoria Cross during the Passchendaele 1917 campaign.

It is important for the medal researcher in that it lists the citation in full then gives a written account of the battle surrounding the VC action - This information helps immensely when researching medals of individuals of the same Battalion and battle - the information is very detailed for example Company letter is given, times etc . If you are collecting medals you will be extremely pleased to obtain this ever increasing hard book to obtain. It was said that the word Passchendaele would strike the most chilling chord of all WW1 campaigns to Veterans. Chiefly remembered for its carnage and waste of human lives.