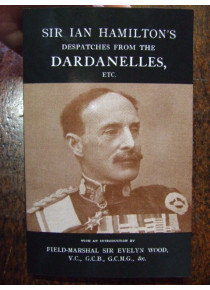 SIR IAN HAMILTON’S DESPATCHES FROM THE DARDANELLES etc. ' from official British War Office records of Sir Ian Hamilton.
These are the official despatches sent by General Sir Ian Hamilton to his military superiors from Gallipoli. Hamilton, a friend of Lord Kitchener, was 62 years of age when he was appointed Commander of the Gallipoli landings expedition to take and hold the Gallipoli Peninsular in 1915. Not universally admired in the Army, he lacked the ruthlessness of truly 'great' commanders. The landings were fiercely opposed; the terrain was harsh and the Turkish opposition so fierce that little headway was made.  These despatches,published while the fighting was still underway, pay tribute to the bravery of his troops, but cannot disguise the fact that the grand operation had become a disaster.