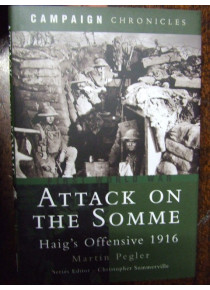 Attack on the Somme Haig's Offensive 1916

Attack on the Somme Haig's Offensive 1916﻿ by M. Pegler

This war book is a reassesment of the great offensive on the Somme in 1916, which argues that the tactics and weaponry that evolved over the five months that the battle lasted represented a learning curve that eventually won victory on the western front.

Martin Pegler is one of several modern military historians whose research has led them to challenge the popular picture of the Somme -Britain's greatest collective sacrifice in the Great War - as an unmitigated disaster. An expert on the Great War, Pegler here re-asseses the great offensive, concentrating on the tactics, the weaponry and the whole five months that the battle lasted - not just the disastrous first day alone - suggesting that the Somme represented a lesson - albeit a bloody one - and the forcing house for new methods that would one day secure victory on the western front. ﻿Australia's major battle of the Somme Offensive was the Battle of Pozieres.
Australia suffered 23000 casualities at the Battle of Pozieres.