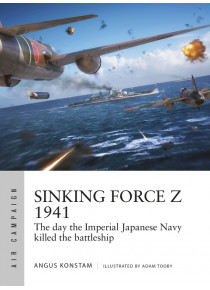 In late 1941, war was looming with Japan, and Britain's empire in southeast Asia was at risk. The British government decided to send Force Z, which included the state-of-the-art battleship Prince of Wales and the battlecruiser Repulse, to bolster the naval defences of Singapore, and provide a mighty naval deterrent to Japanese aggression.

These two powerful ships arrived in Singapore on 2 December - five days before the Japanese attack on Pearl Harbor. But crucially, they lacked air cover. On 9 December Japanese scout planes detected Force Z's approach in the Gulf of Thailand. Unlike at Pearl Harbor, the battleships could manoeuvre, and their anti-aircraft defenses were ready. However, due to the lack of air support (in part) both ships were sank. The Japanese dive-bombers and torpedo-bombers were at that time, the most advanced in the world. The sinking was a great shock to the Allies and the Australian government, however no less than to Churchill who later wrote of the loss,
“I was opening my boxes,” Churchill wrote in his war memoirs, “when the telephone at my bedside rang. It was the First Sea Lord [Admiral Sir Dudley Pound]. His voice sounded odd. He gave a sort of cough and gulp, and at first I could not hear quite clearly. ‘Prime Minister, I have to report to you that the Prince of Wales and the Repulse have both been sunk by the Japanese—we think by aircraft. [Vice Admiral] Tom Phillips is drowned.’ ‘Are you sure it’s true?’ ‘There is no doubt at all.’ So I put the telephone down. I was thankful to be alone. In all the war I never received a more direct shock. The reader of these pages will realise how many efforts, hopes, and plans foundered with these two ships. As I turned over and twisted in bed the full horror of the news sank in upon me. There were no British or American capital ships in the Indian Ocean or the Pacific except the American survivors of Pearl Harbour, who were hastening back to California. Over all this vast expanse of waters Japan was supreme."

9 other products in the same category: