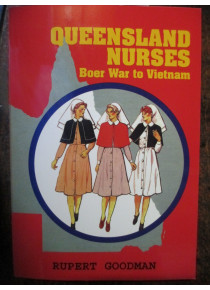 In the 1980's the author was invited by the Return Sisters Sub Branch of the RSL (Queensland) to write a history of the contribution made by Queensland Sisters in all the wars up to that time.

The author, Rupert Goodman who is a veteran from the WW2 Australian hospitals set about obtaining information that could be used as a base for his story.﻿

He made requests through local and provincial newspapers and to his surprise was deluged with diaries, letters, statements and photographs.﻿

This book was first published in 1985 and this is the second edition printed 2017. The book has excellent detail about the World War I and World War II with smaller entries regarding the Boer War, BCOF Japan and Vietnam War.﻿ There are several lists of members names, the most comprehensive is table 5 which lists the members of the Australian Army Nursing Service who enlisted in World War II with the Queensland 'Q' service number.﻿
While the personal﻿ stories are about Queensland nurses, the story encapsulates the Australian units in which they served. So there is much written about the life and times in﻿ Australian General Hospitals (AGH) whereever they were located.﻿ The detailed narrative is supported with a vast array of member photographs.﻿