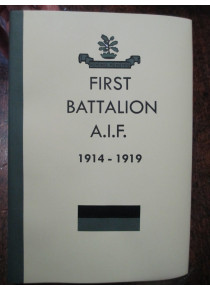 The 1st Battalion is the oldest infantry Battalion from the Colony and State of New South Wales. This book is the Official Veteran Association History of the First Battalion AIF during the First World War.

The Battalion was formed at Randwick Sydney in August 1914 not long after the start of WW1. This history records the activities, operations and men of this Battalion throughout the war.
From the basic training of the men at Randwick Racecourse, overseas training in Egypt, through the many battles and onto the Armistice. For those 4+ years the infantry of this gallant Battalion endured the worst conditions of that so called Great War. Over 6000 men would march through its ranks. Over 1200 would be killed, 2000+ wounded and that's not to talk of the human carnage after the war.
This is Their Story....

On 25 April 1915 the Battalion landed at Anzac Cove in the second and third waves of row boats. Men of the Battalion immediately saw frontline action during the fierce fight for the Gallipoli Heights at Baby 700. Although, these men were forced to retreat when greater numbers of Turks arrived later in the day.
Of course, many stayed their ground and fought to the death.

Personal veteran recollections are recorded throughout the book. For example, this is a 1st Battalion soldier's thoughts on the first day, "having landed waist deep in water, we made a dump of our packs and reformed the Company in close column of platoons. From this point we moved off up the hillside in file, generally single file. We carried, in addition to our ordinary equipment, two extra bandoliers, a shovel, and half a sack of SAA. This plus a steep hill and a hot day resulted in a fairly fagged condition; 'exhaustion' would be the word for it, had it not been for the excitement and the heavy months of training behind us.
We advanced over the several small hills in this way, and halted. There was a little shrapnel.
I thought it ineffectual stuff, with no morale effect. In fact, I was quickly becoming contemptuous of it until a man a yard away from me was hit. He explained forcibly how it hurt, his arm being broken. My opinion then changed entirely, and I decided it was dangerous stuff....."

During the Battle of Lone Pine, The Battalion was bestowed a great honour when two of its soldiers were awarded VC's.
Captain Shout conducted several trench charges against the enemy and personally threw bombs among them. It was during one of these actions that he was severely wounded, losing his right hand and his left eye, later dying of his injuries. He was awarded the Victoria Cross for gallantry. Likewise Private Keyzor (also known as Keysor) was awarded the Victoria Cross for conspicuous bravery and devotion to duty at the Lone Pine trenches on August 7, 1915.

Each of the Battalion's battles and other major activities are well documented with details of the operations and naming of individuals prominent during the battle.

The Birth of an Army.
The Voyage.
Mena Egypt.
To Gallipoli.
The Landing.
At Anzac.
Lone Pine.
The Evacuation.
Reorganization in Egypt And the Move to France
Pozieres.
The Somme Winter
The German Retirement and Bullecourt.
The Third Battle of Ypres
The Winter of 1917-1918
The Shrewsbury Forest Sector.
The Defence of Hazebrouck
The Advance to Victory
The Last Fight
The Armistice and Afterwards
Conclusion
List of Members of the First Battalion Decorated during the War
Nominal Roll of the all members of the Battalion also acknowledging Killed in Action and Died of Wounds.

First printed in 1931 by the First Battalion, AIF Association. The first edition of this book is extremely rare. This book is a facsimile reproduction of the original book. Compared to some facsimile books you will find the print on this book to be crisp, black and clear.

The book has been professionally made with sewn and glued binding (not hot melt), headbands top and bottom. The hard covers have been finshed in real black buckram - insect and water resistance to modern standards. Titles are adorned in gold foil. Complete with outer dust jacket in the style of the 1st edition. Superior coated 100 gsm paper used throughout.

Also includes separate lift out map tracking the movements of the 1st Battalion during World War I.

We are happy to check if a family member is shown in the Nominal Roll.

Don't miss this chance to add an important unit history to your
research collection.!