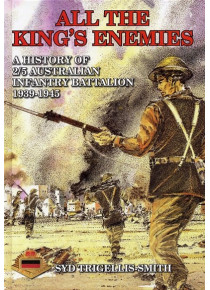 5th A History of the 2/5th Australian Battalion AIF WW2

All the King's Enemies: A History of the 2/5th Australian Infantry Battalion 1939-1945﻿
by S. Trigellis-Smith﻿

Raised in Melbourne in October 1939 as part of 17 Brigade, 6 Division, the 2/5th sailed for the Middle East in April 1940 and took part in Australia's first battle at Bardia in 1941. They were still in action in New Guinea with the war finished. Nearly 3000 young men served with the battalion during six years of warm including 49 sets of brothers and one father and son. The battalion's Battle Honours reveal their many actions: North Africa 1940-42; Bardia 1941; Capture of Tobruk 1941; Greece 1941; Syria 1941; Merjauyn, Damour, South West Pactific 1942-45; Wau; Bobdubi II; Mubo II; Mount Tambu; Komiatum, Liberation of Australian New Guinea; Perimbil; Balif; Yamil-Ulupu; Kapoibus-Kiarivu.

A member of the unit summed up the service of the 2/5th when he wrote "we won no Victoria Crosses, we were not famous but we proved ourselves at Bardia and for sheer dependability and duty well done, we have no better.' This is the history of a fine battalion and the men who served in it when the country and free world was in need.