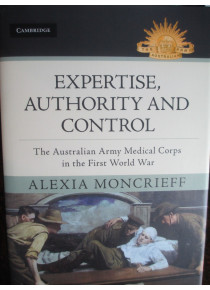 Expertise, Authority and Control charts the development of Australian military medicine during the First World War. This book is the first major study of the Australian Army Medical Corps in over seventy years.

It examines the provision of medical care to Australian soldiers during the Dardanelles campaign and explores the imperial and medical-military hierarchies that were blended and challenged during the campaign. The book then follows the AIF into the Western Front battlefield.
By the end of 1918, the AAMC was a radically different organisation.

Using army orders, unit war diaries and memoranda written to disseminate information within the Australian Imperial Forces (AIF) and between British and Australian soldiers, it maps the provision of medical care through casualty clearance and evacuation, rehabilitation, and the prevention and treatment of venereal disease.

In doing so, she reassesses Australian military medicine and maps the transition to an infrastructure for the AIF in the field.