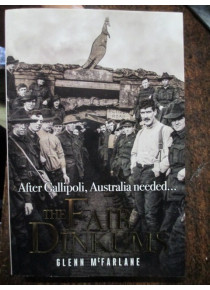 The Fair Dinkums by G. McFarlane

The title of the book The Fair Dinkums refers to the group of Australian WW1 soldiers who were joining up after the landing at Gallipoli and  subsequently knew the risks of death and injury. These men, as they were aware of the dangers involved in enlisting, were said to be ‘fair dinkum’ patriots of Australia. In this book the author follows a group of 152 ‘Fair Dinkums’ mostly Victorians who had joined the 7th Battalion AIF. These reinforcements went to Gallipoli and the killing fields of the Western Front in France and Belgium.
After the evacuation of Gallipoli the AIF was reorganised, the 7th Battalion was split to make the 59th Battalion (called the Pup Battalion of the 7th). Many of the fair dinkums were transferred to the 59th Battalion so the book also covers the journey of these men through the Battle of Fromelles.
Almost at the same time, the men of the 7th Battalion suffered at their ‘gates of hell’ - Battle of Pozieres.
The story does not stop at the end of the war, there is a chapter titled Surviving the Peace which documents what happened to many of those who survived.
The book would be of most interest to family history researchers of the 7th and 59th Battalions.
There’s a list of names of the 'fair dinkums', 7th Battalion men who departed from Melbourne on the ship Anchises 26th of August 1915.

There is also a photo plate the main soldiers referred to within the narrative.