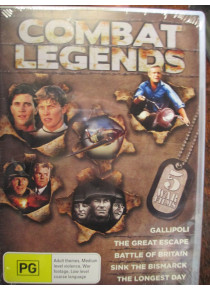 Included on this Combination DVD are 5 Classic war movies of all time. 5 DVD Discs separate movie on each disc.

GALLIPOLI: Mel Gibson and Mark Lee deliver an electrifying performance in director Peter Weir's compelling story of friendship and adventure between two Australian soldiers in 1915. They cross continents and great oceans, climb the pyramids and walk through the ancient sands of Egypt to join their regiment at the fateful battle of Gallipoli. The echoes of history blend with the friends' extraordinary destiny as they become part of a legendary World War I confrontation between Australia and the German allied Turks.

THE GREAT ESCAPE: In 1943, the Germans opened Stalag Luft North, a maximum security prisoner-of-war camp, designed to hold even the craftiest escape artists. In doing so, however, the Nazis unwittingly assembled the finest escape team in military history - brilliantly portrayed here by Steve McQueen, James Garner, Charles Bronson and amen Coburn - who worked on what became the largest prison breakout ever attempted. One of the most ingenious and suspenseful adventure film of all time, The Great Escape is a masterful collaboration between director John Sturges, screenwriters lames Clavell and W.R. Burnett and composer Elmer Bernstein. Based on a true story, The Great Escape is epic entertainment that "entertains, captivates, thrills and stirs" (Variety).

BATTLE OF BRITAIN: Featuring a "big stellar cast (Variety)", including Sir Michael Caine, Trevor Howard, Sir Laurence Olivier, Christopher Plummer, Michael Redgrave, Robert Shaw and Susannah York, BATTLE OF BRITAIN is a spectacular retelling of a true story that shows courage at its inspiring best. Few defining moments can change the outcome of war. But when the outnumbered Royal Air Force defied insurmountable odds in engaging the German Luftwaffe, they may well have altered the course of history!

SINK THE BISMARCK: The story of one of World War II's most famous sea battles is brought to the screen in this exciting, semi-documentary style movie. In the spring of 1941, Nazi Germany's greatest battleship-the Bismarck, scourge of Atlantic shipping, is pinned down at her anchorage in Norway. Making a break for freedom and the safety of air cover from the Luftwaffe, the great ship is chased by the British Navy. Eventually, after heavy casualties including the loss of H.M.S. Hood, the Bismarck is finally trapped and sunk. Kenneth More stars as Capt Shepard - the Admiralty's Director of Naval Operations who, embittered by the death of his wife in an air raid, is assigned to this post just as the Bismarck makes her escape. Excellent special effects make this tense, exciting sea drama one of the finest British war films ever made.

THE LONGEST DAY: On June 6, 1944-the Allied Invasion of France marked the beginning of the end of Nazi domination over Europe. The attack involved 3,000,000 men, 11,000 planes and 4,000 ships, comprising the largest armada the world-has ever seen. Presented in its original black and white version, The Longest Day is a vivid, hour-by-hour re-creation of this historic event. Featuring a stellar international cast and told from the perspectives of both sides, it is a fascinating look at the massive preparations, mistakes and random events that determined the outcome of one of the biggest battles in history.﻿