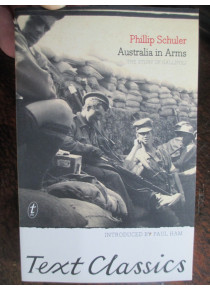 The author Phillip Schuler was the son of the editor of Melbourne's The Age newspaper. He embarked with the first 1914 AIFconvoy as a special war correspondent for that paper. He become friends with Charles Bean the Official War Correspondent.

He landed at Gallipoli and while there he reported and formed the basis of this book. First published in 1916 this was actually the first Australian book ever written about the Gallipoli campaign from an Australian perspective.

Schuler wanted to participate directly in the action and on the 7th April 1916 transferred to the AIF as a driver with the AASC. Schuler﻿ was commissioned, he then went to France and the front in November 1916. On the 23rd June 1917 he died of multiple gun shot wounds.
This book is his legacy.
His last words in the Book described the First Anzacs:
'Open-hearted, ever generous, true as gold, and hard as steel. Australia's first great volunteer army, and its valorous deeds,will live in history while the world lasts'