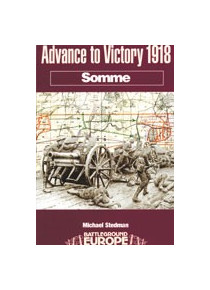 This military book titled ' Advance to Victory 1918 Somme ' by Michael  Stedman is part of the popular Battleground Series .

These books are excellent  for their historical detail which is supported by superb trench maps, tour guides, visitor walks,and then and now pictures. The Battleground series war Books have become very collectable This book looks from a British  perspective at the Battles that lead to the surrender of Germany in 1918.

The Battle of Amiens which was undertaken on the 8th August 1918 has been attributed to be the main cause for the surrender of Germany.This battle was fought by Australian﻿, British, Canadian and USA Forces against Germany.

At the time, the Australian commander General Monash received high accolades for his part in this Battle. A rare Knighthood in the Field was bestowed upon General Monash by King George V.